Book: The Hitchhiker’s Guide to the Galaxy by Douglas Adams

#97 on the Telegraph’s 100 novels everyone should read.

What is the story about?

The story is a comedy science fiction. It follows the adventures of Arthur Dent, who is the last surviving human after the destruction of planet earth. The book is the first of a series of five novels.

I am a bit worried to review this book because of its huge following. But, as always, I will be honest and say truly what I think. 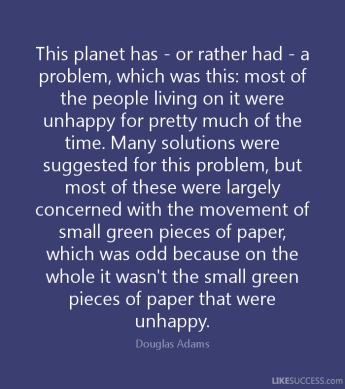 Honestly, I am torn. On one hand, the book is very funny in some parts. It makes fun of the political and economic systems, religion, power, money, and so much more in a light and funny manner. Adams also has very clever and witty quotes throughout the book that are pure genius. It’s also important to remember this book was published in 1979, and how this book predicted many of our everyday tech is uncanny. Like the Hitchhiker’s guide itself is a digital book and the computer is touch screen.

The storyline is plain ridiculous. A man from England was saved from the Earth’s destruction by a friend of his, who turned out to be an alien. They hitchhiked a ride in a spaceship. Then they were kicked out of it and one second before they die in space, they were picked up by another spaceship, which was stolen by the intergalactic president, who has two heads and three arms btw. The outlaw president wanted to go to a planet which legend says has a lot of money. The planet used to make custom planets for the rich and they are the ones who made Earth. They were commissioned by mice to do it, who btw are running the show on Earth. All this so a clever computer can answer the ultimate question of the universe: What is the point of life?

So what is the point of life according to the computer? 42. 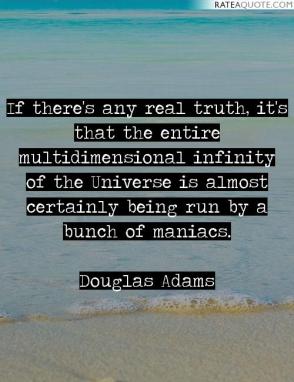 As I said, I am torn. I think I might have to agree with the people who say the Hitchhiker’s Guide is a one liner book. It is full of gems here and there but the middle is not so good.

On the back cover, the Washington Post Book World calls it “inspired lunacy”. I think it’s more of lunacy with some inspiration scattered through. Sorry Hitchhiker’s Guide fans, this is my honest opinion 🙂

3 thoughts on “Book Review: The Hitchhiker’s Guide to the Galaxy (#97)”